This is as promised the continuation of ongoing posts describing the transition from Obamacare to Trumpcare.  It is an attempt to get a heads up on the direction the Federal Government will take and how small to moderate size practices will be affected.

But this particular post is just as much as an observation of the POTUS and his political personally as it is a report on the events surrounding the political theater in the arena healthcare policy.

Let’s start with the latest headlines as shown by Google: 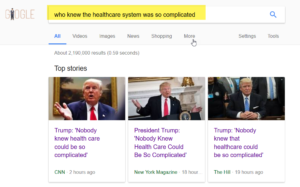 You can see all the major media outlets are making the headlines the POTUS quote and the following article focused on his supposed ignorance.  That his is just waking up to the fact that this is going to be very hard to fix.

I started by searching on what I remembered was what the President actually said.  Google, as usual, didn’t have to remember the exact quote.  But here are his actual quotes:

“nobody knew that healthcare could be so complicated,”

“I have to tell you, it’s an unbelievably complex subject,”

The media’s reaction to these remarks is to respond with a massive “I told you so!”  This is perfectly OK with Trump’s base and many independents.   Why is this, well it quite simple, lots of Americans don’t like a smart aleck.  They don’t just not like a smart aleck, they hate them.  There is a major thread of anti-intellectualism in American culture.

But Trump isn’t playing on this in an overt manner, it is part of his political personality.  He can completely compartmentalize his thinking, therefore claim ignorance on the matter.  The media is totally infuriated that he is  playing dumb.  But in his mind he is truly surprised.   The base actually doesn’t understand how complex healthcare is so they are happy that the POTUS is leaning something new.

In other words, Trump has a natural way to frame ANY SUBJECT.  It would be interesting to get George Lakoff’s take on this viewpoint about Trump, but it appears that progressives and the media are already shooting themselves in the foot.

In the meantime on Friday Governor John Kasich met with the POTUS and pitched more of a repeal-and-repair approach to changing the ACA.  During the meeting with Trump and Kasich they brought Secretary Price on the phone.  Kasich explained repeal-and-repair while Price explained Empowering Patients First Act.  To quote a summary of the meeting the President said, “I like his plan”, talking about Kasich and Representative Renacci’s plan better.

At this point in the game we might as well wait to see what the POTUS has to say tonight at his joint meeting with Congress.